Hello! I've heard great things about this game from a friend, but I'm having trouble getting this demo to work. When I try to launch it, I get an error popup that says "Unsupported game version. Please refer to the readme file for details." Is there any help I can get for this? I'm very lost

Have you read the readme file?

love the game! but I wanted to switch computer and keep my progress, but I can't work out where it keeps its save file on win 10. any ideas??

edit: nevermind found it! for those wondering, you have to show hidden files. way less time than i thought it would take!

The gender identity crisis I've been ignoring for the last 6 years:  :)

Hey there, is there a discord around this game or studio in general?

Thank you so much

Are demo saves compatible with the patreon version? Am I losing out on content if I continue using the demo save?

Yeah, at least it worked for me.

I think they have mildly changed a few early scenes but it's mostly new content.

can you release on android or apk?

What are all of the levers in the ruined industrial district for? i found 3 of them but idk if im missing more or i just dont know what to do

Oh so thats what it does? i had turned it on but i didnt realized it was because of that. Tysm

Haven't played much yet and outside of some tech details like no skip button, no info on what "files" does or no volume slider I'm loving it so far. There's even an otter statue! I'm pretty sure this game was meant for me personally :p

You are planning game version for smartphones?

tragically, no. I dont think i'll ever be able to support android, and i cant distribute on ios even if i Could port it.

question, do old saves work with this new update?

edit: yes they do. Also anyone know how to get the green apron? Can't seem to find it.

Heya! The green apron is hanging up in the convenience store in Skipnoise Ave. you have to pay a few coupons for it though.

Not really, u can get it for free if u want to :b

It's really nice to see such a well made game that is trans-inclusive and sex-positive! The cyberpunk setting is an added bonus as well :D

I'd love to see more games like this, especially ones with queer and transmasculine characters! Is there any possibilty of a sequel like that? Sorry, it's just really difficult to find good 18+ content for trans mlm like myself ^-^;

got as far as i could into the demo!!!! i need NEEd need to see more of this game! ill be going to your patreon as soon as i have the money for it!

The newest update is available from the 1$ tier so that's pretty affordable.

Im so obsessed with Joi, I really want more of her >w<

I have been playing for about an hour or two, and I love the how rich the story feels. You really feel like you get to know the characters. The game feels very alive with all the random events taking place in the city. Would love to see more places to visit and more sexy characters to meet in the future.

We interviewed the team at Ghosthug games about this sexy and amazing looking game ;)

Loving this game it looks so full of cybery coolness!!!

ehe thanks! It totally is!

Uh, whenever I start the game, Windows says it's a virus so what now? Im pretty sure there is a reason why Windows says that.

Last I checked it's because it's a .exe file from an unknown source (Not microsoft verified anyway). I've been playing Hardcoded for ages and it's fine.
There should be a "more options" and "run anyway" style thing that you can click.

Game is fine though, never been a virus. Assuming you got it off itch.io or their patreon though

Would like to buy a full copy. Any chance of buying it without Patreon?

They wrote "first available on Patreon" so I guess there will be free updates but more slowly.

From what I understand, the game isn't finished yet.  The Patreon versions have as much content as has been made, and I imagine that they plan to release a full version you can pay for once once it's done

The visuals and the feel of the game are simply great.

One of the things i love about Hardcoded is that the player has choice,you dont have to engage in sex every five minutes and you dont have to be a complete virgin. And the dreams manage to show the thoughts of the player's character in a pretty damn good way.

And if i have to mention my favourite character in the demo,its the pet drone i randomly decided to name Beeb!

This game is incredible, very well-written, characters you care about, actually engaging storylines, so much great representation, ACTUAL HEALTHY ROMANTIC RELATIONSHIPS THAT LEAD TO STEAMY SEX. Queer as fuck, gotta get it

Thank you so much omg

I don't want to bother anyone but i can't run the game, i'm on windows and whenever i install the windows version it won't appear in my downloads folder. anyone know a fix?

Maybe you're on a 32 bits system, like me on my ol' linux computer ?

I wonder if it would be possible to compile and publish the 32 bit versions as well ?

The visuals throughout are fantastic, and I could gush about it, and the music is great, but the writing is the real star here. The writing on this game is incredible.

I just finished the Heather 7 shower scene, and I was blown away. It was beautiful. It felt like falling/being in love. It was tender and so loving, and beautifully executed with a sensitivity not found in other adult games. The art/music/words... This isn't just an adult game. This is real art. Well done, y'all.

Omg this is so sweet! Thank you so much!!

I'm really enjoying the game. I love the aesthetic and the graphics are perfect. HC is beautiful and sexy.

First of all, I love the cyberpunk aesthetic, and the background plot is actually intriguing. Secondly, I love that the game gives you the option of having no sexual encounters with men. I’m bisexual and all that, but sometimes men can be exhausting and you just want a good ole Sapphic, lesbian, aka ladies-only adventure and this is the one. And as a non-binary person, I appreciate the inclusion of nonbinary characters as well.

This game won’t be free and my third world broke nalgas won’t be able to pay for it (unless I suddenly become a millionaire; do wish for that, please, haha), but I will spread the word so that people who can pay for it will do so. It is looking great so far!

My favourites right now are Beryl, Magdalena, Heather, and Joi. I wouldn’t mind if Candy or Reina were an option, too. I love all the cats, by the way; the character designs in general are very cool. The only one I’m not impressed by is Decima. I guess she’s supposed to be the butch, but she doesn’t look like a hot butch to me, and I am actually way more into butches than I am into femmes. No offence, but she looks kind of like a crackhead, haha. I am also loving the witty writing, like the names of the haircuts. I couldn’t find out how to actually change the playable character’s look, though; I kept buying things but her look never changed. Probably just a demo thing.

Another observation, by the way, is that I like the character can be either dominant or submissive. I feared the character would be a basic sub, but I’m pleased to see she can play as a bratty sub or service top or anything she wants.

Glitch report: After completing Heather’s first even during the second night, the screen went like this: 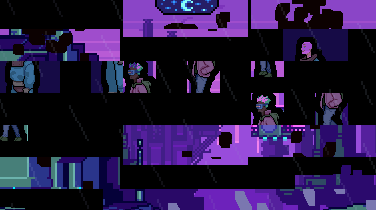 It happened again when I did her second event. And then I realised it happened with all her events. After I saved the game everything went back to normal, but the second I chose her event, it would glitch again. I don’t know if it also happens with the other characters; I haven’t had time for a second play-through or more thorough exploration of the game.

"Most of them are attached to girls"
noice!

It's just cause the dev is unverified. Happens all the time, it's no biggie.

Will this get an android version?

what version is this?

This game really transported me to another world, and I love that about games.

<3 thank you! That feels like such high praise.. I also adore it when games are able to do that for me :3

Do you know if this game will ever come to android?

This game is so great! This one of the only erotica games that I've played that is respectful/inclusive of trans characters and narratives; and includes kinky scenes while not being fetishistic. Plus, beautifully made pixel art and animations!!

One question- based off of seeing him in some of the promo material alongside the other main characters, is Bru going to have a storyline? I assume he's a trans guy and I'd love to have some sexy content for him.

Wow I love this so much! Definitely buying it when it comes out!! I did not expect the world building to be so deep. I haven't finished the demo but I am especially enjoying Joi's storyline and learning about her robot community. I love how it plays in a little window, gives it a vibe like a super-intricate polly pocket! I am also impressed by the way the game makes you unlock new content/game features at what seems like just the right pace to keep things interesting.

I am curious, is Peach from the coffee shop the manager or someone else we meet eventually?

Thank you, Friend. Your review was spot on!'

Oh my gosh thank you I love that too!! I think little windows are really adorable but I think this is the first time I've ever been complimented about it :3 But yeah, Peach isn't the manager, peach doesn't currently have any role in the game but their barista job. I should probly give them at least a little more context aha